Capernaum, Magdala, and the Followers of Jesus

Let me take you on a magnificent adventure by the Sea of Galilee, through Capernaum and Magdala, to discover some of the stomping grounds of Jesus and His followers! Are you ready to explore the land of Israel?

Where are Capernaum and Magdala?

As we adventure to the Northern region of Israel, we will discover two small, yet treasured towns called Capernaum and Magdala.

Capernaum is a historical town nestled on the shore of the Sea of Galilee. The town is only a historical sight today. But the ruins that remain remind us of the powerful works of Jesus as He lived and ministered there.

Magdala, also known as Migdal, is also located near the Sea of Galilee, but it is more than a historical sight. Migdal grew into a modern city with residential areas, businesses and restaurants. Meanwhile, the biblical side is called the Magdala Tourist Center.

What Happened in Capernaum?

Capernaum was one of the main trading villages in the Galilee area in the time of the Bible. Its significance grew that much greater in the centuries to come, because it was one of the places where Jesus lived. Here, He preached about the kingdom of heaven, healed thousands, and called out the lack of faith of the people.

When Jesus heard that John had been put in prison, he withdrew to Galilee.Leaving Nazareth, he went and lived in Capernaum, which was by the lake in the area of Zebulun and Naphtali (Matthew 4:12-13)

Capernaum was also the hometown of some of the disciples of Jesus: Peter, James, Andrew, John, and Matthew. Remains of another structure in Capernaum are believed to be Peter’s house. Today you will find a Catholic church that has been built on top of it. Yet glass flooring inside the church allows visitors to look into the ruins of what could have been Peter’s house.

The most recognizable ancient site in Capernaum is likely the ruins of two ancient synagogues that were built one on top of the other. In the time of Jesus, the synagogue was in the center of the town. At the end of the 4th century AD, during the Byzantine period, a new synagogue was built on top of it.

What is unique about the new synagogue is that its white stones really stand out from the surrounding structures. Majority of ancient Capernaum was built with black basalt, thus making the synagogue special in more ways than one.

They went to Capernaum, and when the Sabbath came, Jesus went into the synagogue and began to teach. (Mark 1:21)

Some amazing qualities of our Savior that are so inspiring are His boldness, confidence, and authority that He walked in on this earth. When Jesus was in Capernaum, He not only went into a synagogue and began to boldly teach about the kingdom of God. But he also delivered a man from a demon in the middle of his teaching!

The Jews that attended the service that day were in awe of Jesus’ authority. And from that day news about Jesus began rapidly spreading throughout the Galilee. It is truly remarkable to think that we can actually see and visit the places where Jesus walked on this earth, healed, preached, delivered, made disciples… He even returned here after His resurrection from the grave!

Then the eleven disciples went to Galilee, to the mountain where Jesus had told them to go. When they saw him, they worship him; but some doubted. Then Jesus came to them and said,

“All authority in heaven and on earth has been given to me. Therefore go and make disciples of all nations, baptizing them in the name of the Father and of the Son and of the Holy Spirit, and teaching them to obey everything I have commanded you. And surely I am with you always, to the very end of the age.” (Matthew 28:16-20)

But the Capernaum synagogue was not the only place where Jesus preached. The Gospels tell us that the Messiah taught in synagogues all around the Galilee (Matt. 4:23). Some towns, like Magdala, were so close to Capernaum, that we can say almost with certainty that He visited its synagogue as well.

The ancient town of Magdala was a popular fishing village and was also the hometown of Mary Magdalene. In Hebrew, her name is Miriam of Magdala. The town serves as a powerful reminder that the love of Jesus can deliver us from the hold of sin, shame, and darkness. He can truly transform our lives just like He did in the life of Mary Magdalene.

“When Jesus rose early on the first day of the week, he appeared first to Mary Magdalene, out of whom he had driven seven demons.” (Mark 16:9)

In 1910, Russian Jews turned the surrounding area into a Moshav or an agricultural village. It was only in 2009 that the construction of the Magdala Tourist Center began. It led to an extraordinary discovery of the archeological remains of a first century synagogue.

Today, this tourist center serves as a place for many to gather together to pray and worship. The excavation site of the first century synagogue draws visitors who want to see where Jesus preached. But Magdala draws our attention to one more important aspect. It is a historical reminder of the important role women played in spreading of the Gospel.

Women played a significant role in leading others to seek the Lord and follow Him with all their hearts. The guesthouse for visitors at Magdala captures the unique and treasured experience of staying in the Galilee where our Savior lived.

Who were the Disciples of Jesus?

As Jesus was walking beside the Sea of Galilee, he saw two brothers, Simon called Peter and his brother Andrew. They were casting a net into the lake, for they were fishermen. “Come, follow me,” Jesus said, “and I will send you out to fish for people.” (Matthew 4:18-19)

It is amazing to see that as Jesus was gathering His team of disciples, He found the first four men along the shores of the Galilee. He called them from their old lives of fishermen to join Him in “fishing” for the souls of people for the kingdom of God.

Jesus chose ordinary men to follow Him, learn from Him, and to carry out the great commission of making disciples of all nations. This should be a great encouragement to us! Because it reveals that our Savior is in the business of using ordinary people to carry out His extraordinary works.

We all know that Jesus chose His twelve male disciples. But did you know that there were also several women who travelled with them? These women also loved and chose to follow Jesus. They provided support, they were there to witness Jesus dying on the cross and were the first ones to visit Jesus’ empty tomb.

Many women were there, watching from a distance. They had followed Jesus from Galilee to care for his needs. Among them were Mary Magdalene, Mary the mother of James and Joseph, and the mother of Zebedee’s sons. (Matthew 27:55-56)

Something special you will discover at the Magdala Tourist Center is a building called Duc In Altum (Latin for Put in the Deep). As you enter this building, you will notice pillars built in honor of women in the Bible that followed Jesus.

The pillars mention by name Mary Magdalene, Susanna, Joanna (the wife of Chuza), Mary, Martha, Salome (mother of James and John), Simon Peter’s mother-in-law, and Mary (the wife of Cleopas). There is also a pillar to collectively honor all other women who supported and followed Jesus.

Then, one last pillar is unique, as it bears no name. It signifies an “open end” in a sense, as it honors all the women throughout history that joined the other followers. It is dedicated to women who have chosen and are choosing to follow and serve Jesus with all of their hearts!

What’s so Special About the Galilee?

Jesus went throughout Galilee, teaching in their synagogues, proclaiming the good news of the kingdom, and healing every disease and sickness among the people. (Matthew 4:23)

As we read this verse, it gives us more than enough reason to see why the region of the Galilee is so special. The Savior of the world lived in this region. He walked through these streets expressing his unfathomable compassion on the crowds that gathered around Him. Jesus healed everyone that came to Him.

He called His disciples to follow Him on the shores of the Sea of Galilee. And He even chose to meet His disciples here after He resurrected from the grave! He preached the truth of the kingdom of God in the synagogues here.

The Messiah taught parables and practical truths of how to live out our Heavenly Father’s commands to thousands. He did so from the mountainsides in this region, as well as on boats floating on the sea. And he even displayed His unique power by walking on the waters of the Sea of Galilee.

This place is rich with incredible history and life changing testimonies of the miraculous healing power of our Savior, Jesus Christ!

Our adventure through the region of the Galilee has come to an end, but I hope you enjoyed the journey. May you feel inspired to come to Israel and experience this special region for yourself! 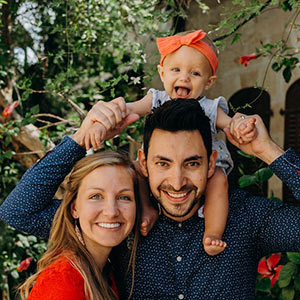